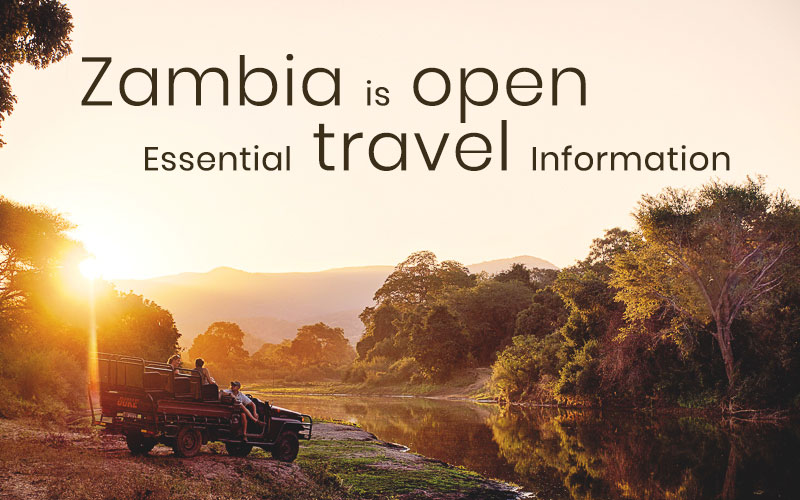 * Eithopian (flying through Addis Ababa) – only require that you adher to the requirements for the country that you are entering.

* Emirates – require you to have a negative Covid PCR test that is no more than 96 hours old as you are transiting through Dubai. A test would need to be carried out in Lusaka.

* Kenya Airways from Nairobi (2 times a week) Test required to fly via NBO.

* Proflight fly to and from Johannesburg from TODAY 1st October. They will be operating 4 x weekly AM and PM flights.

* Rwandair will resume their Lusaka to London (Heathrow) flights twice weekly on the 10th October (via Kigale and Brussels).

As per the South African’s Government announcements travellers from the UK, France, Ireland, Netherlands, Spain and a number of other European destinations may still not enter South Africa. However, if you are travelling from a low risk destination and have been there for at least ten days WITH a negative Covid PCR certificate you are able to visit. All the more reason to therefore come and hang out in Zambia !!!!

What you need to enter and arrival into Zambia

Since Zambia have opened their borders there have not been a huge amount of international visitors, but visitor numbers are starting to pick up slightly. On arrival Visitors to Zambia will have their temperature taken. They must not be displaying Covid symptoms and they will need the following:

* A Negative Covid PCR test (it must be written in English) and no more than seven days old.

* A visa (this can be obtained on arrival) * A face mask

What is open in Zambia

Now is the time to come !!! We can put together a complete Zambian itinerary for you. The choices of camps open in each area are limited, as not everyone has reopened but there is nothing better than taking the time to stay in one place a little longer and really enjoy these areas. Proflight are operating reduced schedules connecting all of the tourist areas and itineraries are built around the schedule parameters.

A number of the Lower Zambezi Camps including Sausage Tree Camp, Old Mondoro and Potato Bush Camp have opened up with a little bit more success than the Luangwa due to their proximity to Lusaka. In the Luangwa The Bush Camp Company have opened up Mfuwe Lodge and Kapamba; Time and Tide have opened Chinzomobo and Remote African Safaris have opened Tafika. It is also possible to visit Remote African Safaris’ Takwela in the North Luangwa. There are a couple of options in the central part of the Kafue National Park, including Green Safaris’ Ila Safari Camp and Mukambe have opened their Busanga Plains Camp.There are several options open in Livingstone as well including Green Safaris’ Sindabezi.

Proflight has a safety management system which is compliant with IATA and part of this incorporates communicable diseases procedures as per the World Health Organisation guidelines. Regular risk assessments and audits are carried out to make sure that procedures remain in place. Proflight have remained operating through out this period (except the month of April) domestically and internationally through repatriation flights. It is mandatory to wear a mask, social distances protocols are in place at airports, check in and passenger temperatures are taken. Full flights are few and far between at the moment however, there won’t be a restriction on numbers if demand increases.

Here is a link to the schedule which is updated regularly especially now as they add new flights to meet the demand which is slowly slowly increasing https://proflight-zambia.com/planning/when-do-we-fly.php#time-table-downloads

If you are postponing holidays do build them around current schedules. In April and May 2021 they will have daily flights from Lusaka to Livingstone and the Lower Zambezi and flights five times a week to the South Luangwa.

The main real difference is in the safety procedures. Zambia has taken everything very seriously and as a result the airports are well run and efficient in terms of protocols as are the camps and lodges.

All of the camps and lodges take your temperature twice a day, guests are asked to sanitise and wear a mask where appropriate. At the moment numbers are low so private vehicles are often given however this will not be guaranteed for next season with vehicle number of 4 being the norm, unless you are your own group.

Once at the lodge guests tend to slightly relax. The camps and lodges are generally quite spread out and people tend to social distance rather than wear masks everywhere.

If you fly with Emiartes you will need a negative PCR Covid Test in order to board the flight. Nick is working to set up a Covid Testing facility specifically for international visitors in Lusaka and will send further information through once this is up and running. At the moment the testing is quite straight forward. There is a good online platform to book a test. During the testing they were professional and respectful. You then choose how you would like to receive your results sent via text or e-mail. It cost approximately $150pp per test for the test. At the moment there is a 24/48 hours wait for the results but typically they are more like 24 hours. To be on the side of caution we would recommend building in a two nights in Lusaka. Testing can also be arranged in Livingstone as well with similar result times.

We recommend that if clients feel that they need treatment and hospitalisation we would recommend getting admitted to one of the private hospitals in Lusaka (they meet international standards). Here you would get tested and begin treatment.